Holacracy defines itself as “a customizable self-management practice for organizations”. This idea is not very far from the self-organization approach of Scrum, but it proposes a different framework to deal with issues. In her article “Decentralising Leadership: Holacracy in Practice”, Sandy Mamoli shared the story of implementing Holacracy in an Agile organization.

The article starts by explaining the main principles behind Holacracy. Roles are defined around the work, not people, and are updated regularly. People can fill several roles. Teams are self-organized as Holacracy replaces the traditional hierarchy with a series of interconnected but autonomous teams called “circles”. It promises better collaboration, radical transparency and decision making at the right level of the organization. It also supports continuous improvement as each team is responsible for its own development. 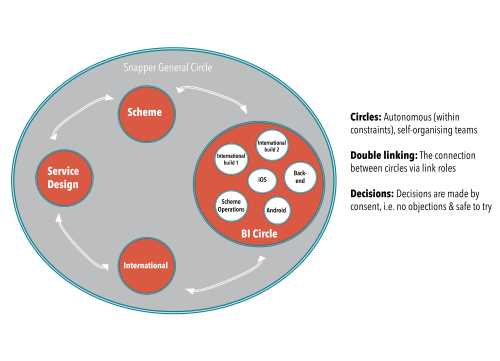 In the case described by Sandy Mamoli, the company started with a clean sheet and tried to implement the Holacracy principles strictly according to the rules. It was initially confusing for many people as each had a different understanding of the concepts. However, after three months of experimentation, people become more comfortable with how Holacracy worked and were ready to adjust the principles to their own needs. For instance they adjusted some of the terminology. The overall conclusion of the article is that “we have seen how powerful Holacracy can be to drive continuous improvement, provide clarity and visibility across an organisation, and get decisions made quickly with the right people involved.” However, as for Agile, the important is to understand the principles behind the approach and adapt it to your own organization.

Read the complete article on http://www.methodsandtools.com/archive/holacracy.php